Alright, I suppose this is going to be the first post that is directly related to Rothingham. While The 3 not-so-princesses is in high gear, I’m developing the story and characters for the comic that will run on this site. Here are some concepts I want to share with you. 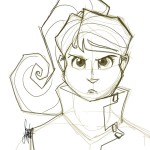 The main character is heavily based off Korie Bluff from Trio Solution, but as you may notice, she’s progressively moving away from her initial design. I like the asymmetrical hairdo, which also goes for Li Zeika, who will be in the comic as well. The latter had an awkward design in her original incarnation, being one of the first characters that wasn’t “neckless”. I like where this is going, she’s more beautiful (moreso than “Korie”), but she’s still a bitch, the good kind.

This entry was posted in Art, Concept art. Bookmark the permalink.